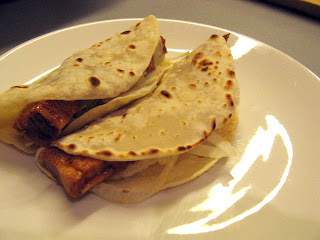 Well it's a lazy Sunday. I've just got my pork cheek on the smoker, after a two week wait as it cured and hung. Hrmm actually it looks like it might be smoking a bit too much, maybe the woods on fire. False alarm. Anyway, after that's done and I've finished writing this post, I'll be relaxing in the sun with a cold beer devouring the latest issue of Lucky Peach. But enough about lazy Sundays and sunshine, on with the post.

Guess what? I was having pork belly again! This time with a tasty Chinese spice rub. The conundrum of it though, was what to have it with. A bit over roast vege and rice, but I wanted some carbs to have with it. After a deep introspection, or rather making myself hungrier by working my way through cookbooks, blogs and magazines, and still at a loss, a little light of inspiration went off. I thought of those pancakes you get with Peking duck, they can’t be hard to make right? I’m pretty sure I’d have all of the ingredients, they can’t be that complicated. I’m not leading up to a ‘but I was wrong’ I promise. After a bit of research on the Internet, and comparing several recipes, I was fairly confident, they were indeed easy to make, and I had everything I needed, a pan, sesame oil, flour, boiling water. 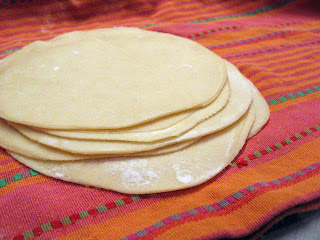 Mix together 2 cups of flour and 1 cup of boiling water, and kneed until it forms a smooth ball. Wrap and rest the dough for 30 minutes.

Roll out the dough to a thickness of a 2mm, then cut out rounds with a cutter, repeat this until all the dough is used. You will need an even number of rounds.

Coat one side of a round with sesame oil using a pastry brush and then place another dough round on top, the sesame oil in the middle. Repeat until all the rounds are sandwiched together.

Roll out each round paper thin, store between a couple of tea-towels so they don't dry out. 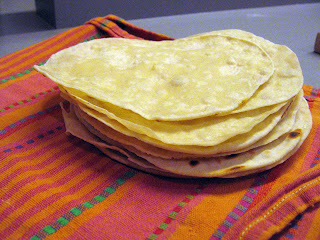 In a dry frying pan, cook for 60-90 seconds on each side. And again store the cooked pancakes between a couple of tea-towels. 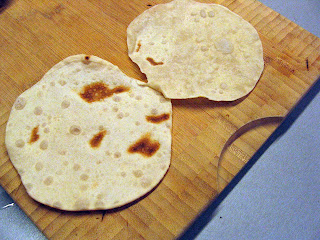 When all the pancakes have been cooked, pull apart into two pancakes.
Posted by Stephen Garrett at 12:03 PM