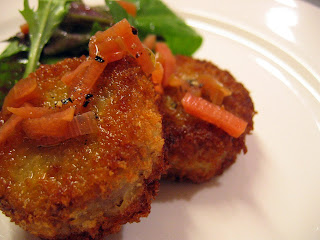 It started with a tweet, and I immediately knew I wanted to try pickled rhubarb. It is a foreign idea to me, something I should of heard of, I grew up with rhubarb in the garden and have had it many different ways... ok mainly stewed. So the next visit to the vegetable shop, I made sure to pick up a good bunch of stalks. I sliced them up, and put them in a jar with vinegar, sugar and spices. But now what?

So with a freshly made jar of pickled rhubarb in the fridge, and totally riffing off (not ripping) Chris Cosentino’s tweet of trotter cake, I rang the butcher to set aside some porky feet. No luck, but no matter the pickle wasn’t going to go off, or run away, anytime soon. I stopped off at the supermarket to pick up some essentials, and walking through the chilled meat area, I spotted a decent looking pork hock, not a big one, but big enough to at least try out an idea.

So, pressure cooker time again, but a normal slow cooker, or dutch oven would do the trick, they just take a lot longer. I took the hock and browned it all over, then chucked in a sliced carrot, juniper berries, garlic, salt, pepper, cider vinegar, and quarter of a cup of water. I cooked it on high pressure for 1 hour, and then let the pressure drop naturally. After lifting off the lid, I separated the meat from the bones and set aside. Then strained the liquid and put it back in the cooker with the bones and cooked on high pressure for 15 minutes. While the liquid was cooking for a second time, I pulled apart the meat, letting it tear naturally, not turning it into mush.

After the stock has had its second go at cooking, take a spoonful of it and put it on a plate, and place it in the fridge. After about five minutes, check to see if it has set. If it hasn’t, reduce the cooking liquid by about a third and check again. When the liquid is ready, wet the shredded meat with it, just enough to coat it, you don’t want it swimming in liquid. The leftover cooking liquid is a great stock for soups. 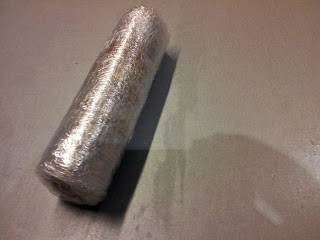 Now the easy part, and totally environmentally friendly, yeah, OK, you’re going to need quite a bit of plastic wrap, but it is easyish. Roll out a good foot and a half of wrap on the bench and spoon the meat out into a rough log shape, use the plastic to roll up the meat, folding up the sides to keep the shape. Use another layer of plastic wrap to re-roll the meat log, tightening it to hold its shape. Put it in the fridge overnight to firm up. 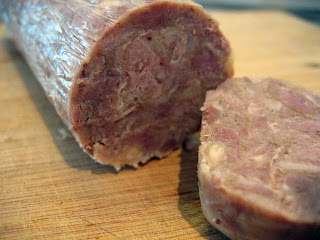 You know, it’s not as simple as take it from the fridge and eat, or even cook and eat, it’s going to go back in the fridge again, but hey, you’ll at least get to eat it on the same day. So take the log and slice off medallions, take each medallion and coat in flour, dip in a beaten egg; water; salt mix, and coat in bread crumbs (panko). Place the coated medallions on to a sheet-pan, and then back into the fridge for at least 30 minutes. Putting it back in the fridge gives the coating a chance to set, and means it won't fall off when cooking. 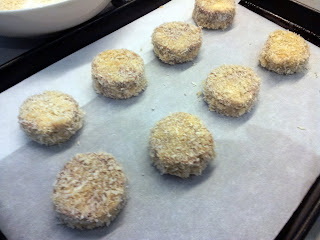 Remove the pan from the fridge about 10 minutes before you want to cook. Get a heavy based pan on a medium-high heat, with a good coating (5 mm deep) of rice bran oil (or other neutral high smoke point oil), fry the pork cakes 30 seconds per side flipping twice (1 minute per side total), place the cakes on some paper towels to drain. 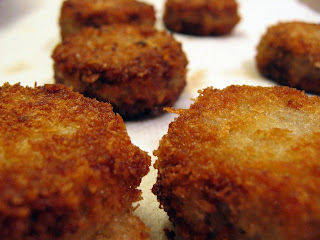 Serve with a nice leafy salad, rocket would be ideal, and some rhubarb pickle. 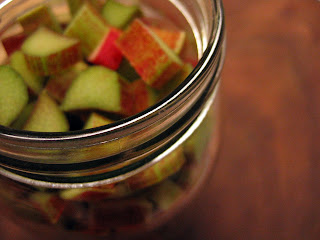 Pickled Rhubarb
Slice up enough rhubarb to fill a jar.

Put a pot on medium heat with 1 cup cider vinegar, 1 cup of brown sugar and some spices (allspice, ginger, cloves and star anise), bring to a simmer. When all of the sugar is dissolved, remove from the heat and pour into the jar, make sure to get all the spices in. 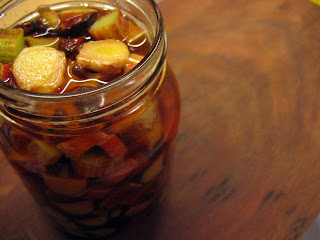 Seal the jar, and let it cool. Store it in the fridge, it should last a month, but it’ll be best for a week after a week of storing.
Posted by Stephen Garrett at 9:40 AM