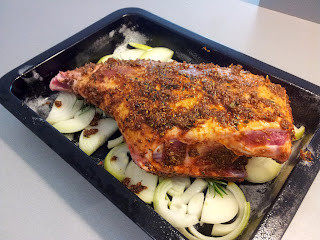 You can roast a pork belly for a few hours at 180ºC and you'll end up with some pretty good meat with great crackling, or you could cook it forever, as I have done in the past, or even follow David Chang's method of 6 hours or so uncovered basting now and then (Lucky Peach, Issue #2, page 121). You can confit your meat at 130ºC for 3 hours, and have pretty good results, you won’t be complaining about what you're eating, or you could confit it at 90ºC, or even 70ºC for 12 or 24 hours and have great results. There isn't really any extra effort involved, just a bit of extra time, or in some cases a lot of extra time, but it is passive, it doesn’t require you to be in the kitchen.

The idea of not having enough time to cook is being pushed on us more and more these days, Food in a Minute for example. While Food in a Minute is a shill hocking off what are essentially prepackaged meals, there are others out there making their living off meals under 30 minutes, or X number of ingredients or less, it just feels like they’re making the act of cooking a chore and something that you need to get done as fast as possible. It shouldn’t be that way, it should be a pleasure, something you don’t mind taking that extra bit of time to do well. But I don’t have kids, I cook for two usually, so maybe I don’t understand the pressures of cooking for the whole family. Maybe I’m just a nut, I like getting home and spending time in the kitchen cooking dinner, then after eating, and cleaning down, I may do a bit of prep work for the next nights meal.

My preferred method when it comes cooking a leg of lamb, roast it low and slow. Save the med-rare cooking for the cuts that show it off best, rack, backstraps, rump. Leg (and shoulder) should be unctuous, falling off the bone, rich with it’s meaty lamb flavour, nothing beats it. Grind all the ingredients (apart from the olive oil) in a mortar and pestle. When everything has been thoroughly crushed and ground together, add enough olive oil to form a thick paste.
The LambPreheat the oven to 140ºC. Slice up a few onions and layer on the bottom of a roasting pan. Remove the lamb from the fridge and coat with the spice rub, place it on the bed of sliced onion. Leave the lamb out for about half an hour, which should be plenty of time for the oven to preheat, and take the chill off the meat (never cook meat straight from the fridge).

Half an hour later, put the lamb in the oven (uncovered) for 30 minutes, giving the spice mix a bit of direct heat to release its flavour. Remove the roasting pan from the oven, pour in 250ml of red wine, cover tightly with foil and return it to the oven for four and a half hours, basting a couple of times throughout the cooking.
When the long wait is up take the pan out of the oven and set aside to rest. Turn the oven up to 200ºC. Carefully remove the leg from the pan to a cutting board, and cover. Strain the liquid from the pan into a saucepan. Again, carefully transfer the leg from the board to the pan and roast for 15 minutes in the hot oven, giving it a nice golden crust.

Meanwhile, reduce the cooking liquid, but not too much, just enough to have a good strong sauce. Thicken it with a little arrowroot dissolved in water, do not bring the liquid to a boil again as it will become loose. I like arrowroot as it thickens without adding flavour, and it doesn't make the liquid cloudy, but if you prefer you could go down the traditional flour gravy method.

The meat should have a good golden crust and be falling off the bone tender, but not falling apart. It's perfect for a cold night, served on a parsnip & potato mash made with lots and lots of cream.

Posted by Stephen Garrett at 6:26 PM