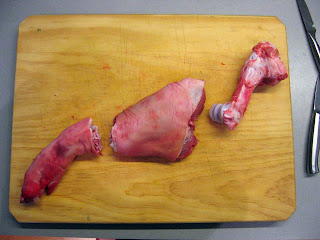 I’ve been meaning to make this dish ever since I got my hands on Fergus Henderson’s Nose to Tail Eating: A Kind of British Cooking, the recipe jumped out at at me as I read my way through the book, a challenge to make something I’ve never eaten before, and it also sounded pretty damn delicious. Not everything went entirely smoothly, in fact it rather felt like the world was conspiring against me and my attempt to make this recipe. For the life of me I couldn’t get my hands on caul fat, I found wholesalers who had frozen blocks of it, but they wouldn’t sell to individuals, several butchers (including my local) couldn’t or wouldn’t get it in, I rather hope it was the former. Another hurdle, which I hope was just a misunderstanding on my butchers part, was their refusal to give me a trotter that wasn’t just the hoof, as that is a how they sell trotters, and they argue that any more leg would damage the hock, which in my opinion is a load of hock, to get what I wanted I swallowed the bitter pill and took the trotter with the hock still attached. So I had to add a little more butchery to the whole process, bisecting the leg at the appropriate joint, and hey, no damage to the hock meat, surprise, oh well, c'est la vie. 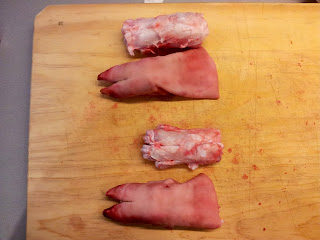 With what I thought was the the hard part over and done with, I resigned myself to the fact I wouldn’t get my hands on any caul fat, so the finished dish would be a bit different than expected, a little less crisp. I set about working my way through the initial, namely de-boning the trotter, a doddle I thought, I had watched youtube videos, I had downloaded skeletal diagrams, all in preparation, I tell you what though, no amount of research could've prepared me for the chore of deboning the first trotter. It took a while, a long while for the size of the job, a small little hoof with a couple of bones, knuckles and a crap tonne of tendons. But in the end I got it done, and the skin was still intact. With a heavy sigh, I set about on the next trotter, which to my surprise, and all the skills of a master butcher I'm sure, I got it deboned in about 2 minutes, that was at least million times quicker than the first. 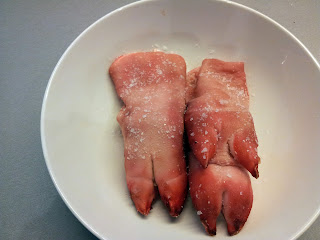 With the difficulties of deboning behind me, I took the now limp trotters and liberally salted them, placed them on a dish, covered and retired them to the fridge. The bones that were extracted from the trotters (and the extra I had from above the hocks) got placed in my brand new 16 litre stock pot, which I got for my birthday (I am easily pleased), along with some stock vegetables, herbs, peppercorns, a little salt, covered with water, and set to simmer for 2–3 hours, skimming off the scum that rises to the top. 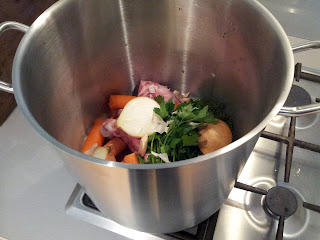 Feeling resilient, I set about cleaning the kitchen down, and then managed to relax with a cold Ritzling that had just arrived in the post, along with my invite to the programme launch of Visa Wellington On a Plate. So for the next couple of hours I pottered about, sipping wine, skimming stock, watching some Miami Vice (a guilty pleasure). Finally when the stock was done, it got strained through some cheesecloth and set aside to cool. 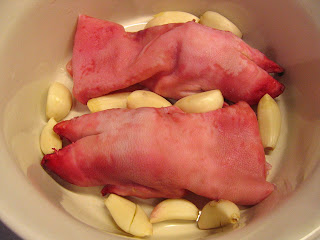 As you may of gathered by now, this is a bit of a long-winded process, and if you’ve read much of my blog, you’ll probably notice, it happens often. But soldiering on, when the stock is cool, take the trotters from the fridge, thoroughly rinse off the salt, and pat dry. Place the now dried trotters in an ovenproof dish, surround with one heads worth of peeled garlic cloves, and pour in enough 50/50 mix of red wine and stock to cover the trotters. Cover with tin foil, Cook for 3 hours at 175ºC.

After the allotted time in the oven, remove the baking dish, and allow it to cool, but not so long that the liquid sets to jelly. Carefully remove the trotters and set aside. I had a small issue of the trotter skin splitting, I’m not too sure why it happened, I think maybe the oven was a little hot, but the onset of depression, and thoughts of all my hard work gone to waste were quickly set aside, and I pressed on, no damn trotter was going to defeat me! I’d just simply reshape the skin around the stuffing, no biggie.

While the trotters relax on the bench, cooling down to handleable temperature, the stuffing can be made. It’s a simple mix of boiled potato (I used agria) passed through a ricer to make a smooth mash, mixed with a couple of diced shallots that have been sautéed in two good sized tablespoons of butter (or duck fat) until translucent, but not brown. When everything is cool enough so that you won’t get third degree burns, carefully start stuffing the trotters, reshaping them to their original form. If by luck you have caul fat, Mr. Henderson advises not to overstuff the trotters, as the potato will swell when cooked. So in saying that, if you have caul fat, wrap the trotters tightly in the fat, trim off any excess, place on a dish, cover and refrigerate overnight. But as I mentioned earlier I didn’t have caul fat, so I lightly oiled some aluminum foil and placed the reshaped trotter near the edge and carefully, but tightly rolled the trotter in the foil, maintaining its shape and not pushing out any stuffing, it then got a layer of cling film and a rest in the fridge overnight.

The trotters wrapped and in the fridge and the kitchen in need of another clean up, I stored the cooking liquid from trotters in a container in the fridge destined for a sauce. I must be a glutton for punishment, the kitchen was cleaned down again, and then I set about making dinner for that evening, as the trotters wouldn’t be ready till the next day.

The final stretch is painfully simple when compared to the rest, remove the trotters from the fridge, heat the oven to 200ºc, place an oven proof sauté pan on the heat, and fry the trotters until brown all over (if they’re in foil do make sure to unwrap them first), then place the pan in the oven and cook for about 20 minutes. Easy huh, well there are accompaniments to sort out, sautéed savoy cabbage, a few pickled rhubarb slices, and a sauce to prepare, a red wine reduction with shallots and the reserved cooking liquid (now jellied), strained and enriched with butter. 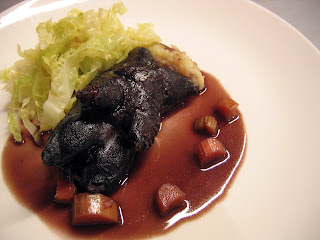 It made quite a dramatic plate of food, the hoof stained dark with the red wine set against the bright green of the cabbage, the flavour didn’t disappoint either, rich melt in the mouth porky skin with its fat melted into the mashed potato, the sauce enriching it and making it very indulgent, finally a nice sharp bite of rhubarb snapping it all back to reality, and alas the plate was empty far too soon. Even the other half managed to get over the fact there was a foot on her plate.
Posted by Stephen Garrett at 6:16 PM