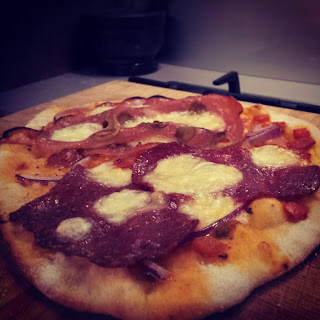 With the death of my trusty Kenwood mixer, well not death but I need to order a couple of capacitors and get out the trusty soldering iron, I’ve had to revisit my trusty pizza dough recipe, I used to make a pretty standard 60% hydration dough but recently have been experimenting with the water content of the dough and have found nudging up the liquid content to 80% and adding about 5% fat, in the form of olive oil, has drastically improved my crust. I mentioned earlier, the trusty mixer is dead, and quite frankly I’ve become pretty lazy when it comes to kneading dough, I rely pretty heavily on it, and hey I broke a bone in my wrist so kneading is not that pleasant at the moment, excuses excuses, anyway this is my no knead method that doesn’t take 24+ hours but does involve a little more labour than mix and forget. It will require a good 3-4 hours of your time, but probably no more than 10 minutes of attention, the initial mixing, and then hourly folding, and by the end of it you should have a wonderful light puffy dough.

Stir together the water, sugar and yeast, let it sit until the yeast has bloomed and you have nice frothy mixture.

Mix together the salt and olive oil, make a well and pour in the yeast-water along with the oil. Set aside for 30-45 minutes, this will give the gluten a chance to hydrate.

After the dough has rested, and risen, probably about doubled, use a spatula to bring one edge up to the centre, rotate the bowl 90° and repeat until all four ‘sides’ have been folded over 3 or 4 times, let the dough rest for another hour and repeat. This is a long fermenting dough and the folding will be repeated 3 more times, about 4 hours rising time in total.

Pick off a lump of dough, roll thin, trying to use as little extra flour as possible, and cook in a very hot oven (250-300°C) on a pizza stone that has been preheating for 40-60 minutes until blistered and golden. 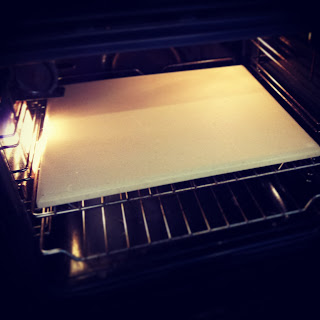 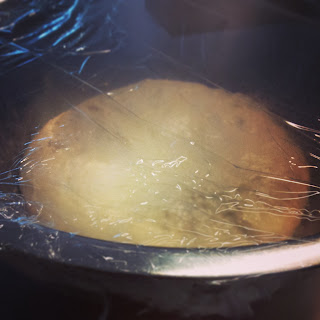 Posted by Stephen Garrett at 11:03 AM