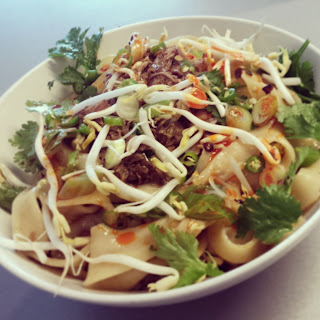 Finally back from holiday, a week of sun and lounging next to a pool with a cocktail in hand, life was hard, however the cool Wellington weather snapped me back to reality as soon as I stepped out of the airport, gone was the hot 30ºC sunny weather. Unfortunately I didn’t come back with just photos and good memories of the much needed break, I was also covered in jellyfish stings which I sustained on the last day snorkelling through a rather dense patch of their larvae. So after a few days recuperating I set my mind to the next kitchen project. It came together serendipitously as much of my ideas do, I was at Yans supermarket stocking back up on the usual suspects, tapioca starch, fish sauce, rooster sauce and the like, and then killing a little time at the butchers next door waiting for the other half, when I spied a rather good looking, and dirt cheap, lamb fore-quarter. My mind shot back to my last trip to Auckland and Xi'an Food Bar with their amazing hand pulled noodles. I went into research mode, and hunted down methods and recipes, which are a bit lacking in detail online, so this is my version muddled together from many sources, one person's way to knead, someone else's resting times, and quantities fudged by me from what I could find. There are so many recipes just saying ‘enough’ water. How much is enough? Fundamentally it’s just flour and water so surely the ratio is important. I ended up deciding on 60% hydration (10 parts flour 6 parts water), when I first started out I thought it may be a bit dry but with the resting steps the flour hydrates and becomes soft, pliable, and incredibly stretchy with the kneading method.

Tip the flour into a large bowl and make a well in the centre. Pour in the water and mix to form a ball of dough. Don’t worry about mixing it too much, it doesn’t need to be a smooth ball of dough. Cover with cling film and let it rest for 15 minutes. 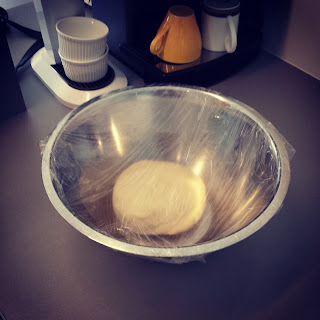 Place the dough on a clean work surface and start to roll out into a log about 60cm in length, take one end and fold it in half to the other end, repeat the rolling and folding for about 15 minutes, giving it a chance to rest for a couple of minutes every five or so. The dough should be very smooth by now, if not keep kneading. Place the dough in a clean bowl and cover with cling film, let it rest at room temperature for a hour.

Take the dough and shape it into a rectangle about 10 cm wide and 3–4 cm thick, cut off a 1 cm slice, so you should have a rough rectangle of dough 10 cm long, 3 cm wide and 1 cm thick, coat the slice in a neutral oil, such as Canola or rice bran, lay the piece on a tray. Repeat until done. Cover the tray with cling film and place in the fridge for a hour.

Take the dough out of the fridge ten minutes or so before you want to cook, and have a large pot of salted water on the boil, you want to stretch the noodles and get them straight into the pot, this is best done one serving at a time, so don’t try and do the whole lot at once, four or five pieces is a pretty generous serving size. 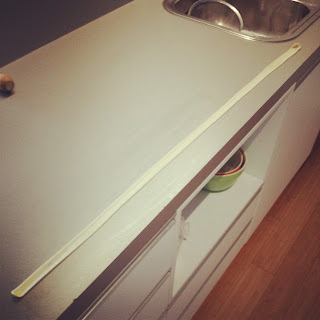 Take a piece of dough and start to stretch it out holding one end in each hand and oscillating it up and down as you go, slapping it against the bench. Sounds a bit weird, but easy once you’ve got the hang of it. Lay the pulled noodle out on the bench and move on to the next. Once the serving of noodles have been pulled, gently roll a rolling pin over the noodles, don't really use any pressure just let the weight of the pin help even out the noodles.

Now for the fun bit, take one end of a noodle and tear it down the middle right to the other end, don’t tear it in two leave it as one long noodle, get them into the boiling water and cook for about 3 minutes, once they float to the surface they’re cooked.


Here’s a good video to show the method of stretching out the noodles, and hey it’s got Andrew Zimmern in it.

I had a pretty awesome fore-quarter of lamb, I ended up removing the neck and fore shin for a later use, but a decent shoulder cut should do the job too. 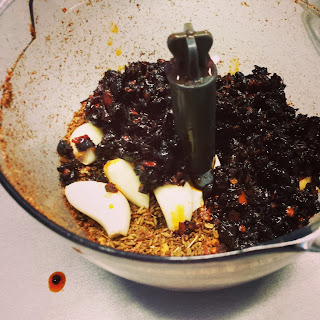 In a blender combine 3 parts cumin, 1 part chilli, 1 part prickly ash, a good tablespoon of salt, 6 or 7 cloves of garlic, a good portion of a jar of the black bean chilli sauce (about a cup and a bit) and a little extra oil. Blitz until it forms a rough paste. 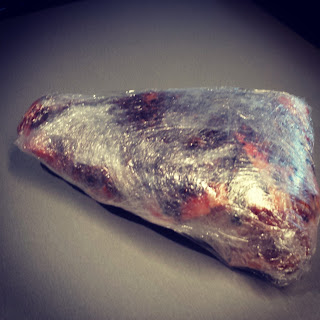 Make slashes in the fat on the flesh side of the meat and generously rub the paste all over the lamb. Wrap tightly in a few layers of cling wrap and leave it to rest overnight in the fridge. 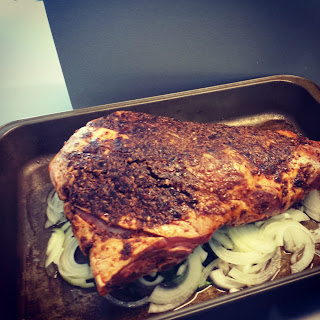 Preheat the oven to 220ºC. While the oven is heating remove the lamb from the fridge and let it sit on the bench for about 30 minutes. Slice up a few onions and make a trivet in a roasting pan with the slices and some coriander, add a splash of cooking rice wine. Lay the lamb on top of the onions, cover tightly with tin foil and place in the heated oven, turn the temperature down to 150ºC and cook for 4 hours 30 minutes. 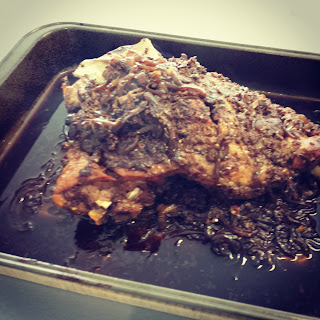 Getting it all together
Remove the lamb from the roasting dish, carefully, wrap it in tin foil and set aside to rest and also to cool down a little so it can be pulled apart a little easier. When it’s cool enough to handle remove all the bones and roughly shred with a fork. Cover and set aside. 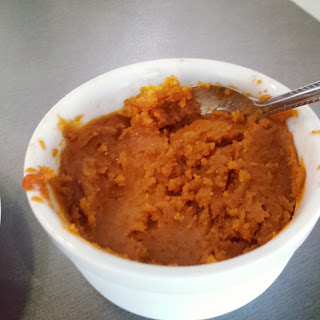 Strain the cooking liquid into a pot with some chicken stock, a 50/50 mix of stock and cooking liquid is good, bring to a simmer and reduce a little, taste and season as you like, I added a little extra chilli. There will probably be quite a bit of fat in the sauce so you can skim it if you like, I skimmed quite a bit off and then tossed it through the shredded meat, a bit decadent.

Serving
Place a ladleful of the sauce into a large bowl along with a portion of lamb a few coriander leaves and chili slices. Get the noodles pulled and into the boiling water, when cooked pull out with tongs and toss in the bowl with the lamb, transfer it to a serving bowl and garnish with extra coriander, chilli, bean sprouts, spring onions and chilli oil, or whatever else you have. Get the next portion on the go.
Posted by Stephen Garrett at 12:59 PM