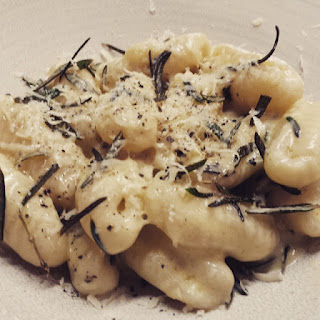 Well I could wax lyrical about cavatelli, yet again, and perhaps bore you all to death with yet another combination of flours, toasted grains and instant potato flakes, but not today, yes this ultimately ended up as a pasta dish, a cavatelli dish, but it’s not so much the pasta as it is the sauce, in fact I ended up trying this out on two different versions of cavatelli, popcorn grits variety, that had been languishing in the freezer, as a tester, and then the finished dish with roasted rye cavatelli, both good combinations.

The sauce, and the excuse for more pasta, was heavily influenced (read, copied and modified) from Ideas in food’s bullet proof beurre monté and their later post bean monté. I had for a while wanted to have to make this extravagant sauce, with guests coming I had an excuse, plans started forming.

The great thing about the sauce and the cavatelli is they can both be prepared the day before, if not two, so it makes for a much easier cooking experience when guests are due, and heck you can even cook out the cavatelli on the day and shock it in an ice bath then refrigerate until needed, sautéing it until warm through and crisp on the edges. With the sauce, unlike a traditional beurre monté, it can be cooled down and reheated without the fear of it splitting. 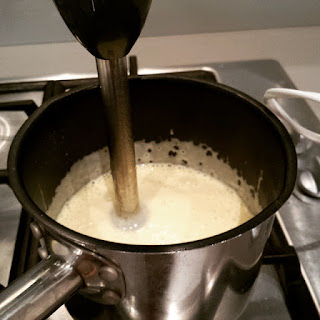 
*I used water that I had cooked a batch of whole rye in, and then infused it with thyme and rosemary. 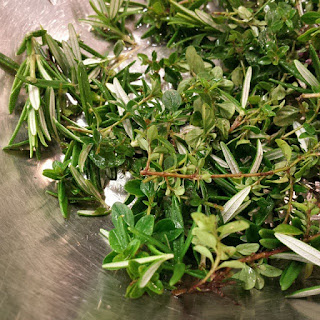 Infused oil
Over a low heat, infuse a large amount of rosemary leaves and half a dozen or so garlic cloves in about half a cup of olive oil and half a cup of canola oil. Let it bubble and warm through on the heat for about 15 minutes, then remove and cover, letting it sit for a further 15 minutes to extract all possible essential oils from the wood herb. Strain and transfer to a glass jar. Keep in the fridge until all used up.

Putting it together
Place a sauté pan over a medium heat and add a splash of the infused oil, when hot, add a sprigs worth of rosemary leaves and let them sizzle. Add the cooked, drained cavatelli to the pan and sauté until just crisp, and if chilled, warmed through. Reduce the heat to low, add enough of the beurre monté to coat the cavatelli and toss until warmed through. Plate up, finish with a smothering of finely grated sharp hard cheese and a few turns of black pepper.
Posted by Stephen Garrett at 1:44 PM