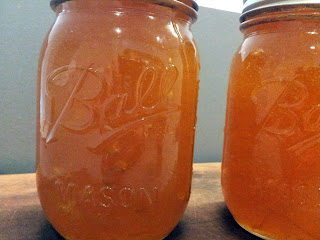 Having a pressure cooker comes in handy sometimes, from speeding up cooking times, eliminating the need to soak dried legumes, meaning you can whip up a batch of hummus from dried chickpeas in no time at all, or braising meat, wonderful pulled pork without heating up the house and not taking hours on the stove or oven, it makes congee a effortless affair, it’s ideal for medium sized batches of stock, and you can take advantage of its unique cooking method by making things like caramelised carrot soup or hamine egg.

Recently I’ve added marmalade to the list of things to use the pressure cooker for over the traditional method. The most time consuming process of this recipe is slicing the fruit and removing the seeds, the total cooking time should be around 20 minutes, depending on the amount of sugar and liquid used, maybe another 5 minutes if you want to process your jars to make them shelf stable.

The quantities below, are enough for two 500 ml jars. Another advantage of this pressure cooked method is making small batches, or experimental batches more viable time-wise.

Slice the grapefruit thinly, about 2–3 mm, a mandoline is invaluable for this. When the grapefruit have been sliced, pick out the seeds from the slices, piling them in stacks as you go. Cut each stack into four so you end up with piles of quarter slices of grapefruit.

Scrape the grapefruit into the pressure cooker, making sure to get as much of the juice from the board as possible. Add as much tea as your pressure cooker needs to get up to pressure, at least one cup, I used two, but keep in mind how much liquid you add now will increase the amount of cooking time after you add the sugar. Cook on high pressure for 10 minutes. 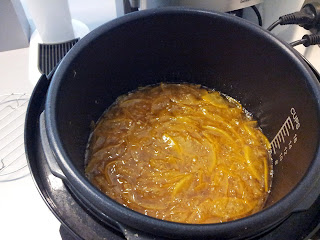 Remove the pressure cooker from the heat and let the pressure drop naturally. When the pressure has equalised, remove the lid, and pour in the sugar, stirring until dissolved. Place the cooker back on a medium heat, and simmer until the temperature reaches 104°C, about 5–10 minutes. If you don’t have a candy thermometer you can drop a small spoonful of the mixture into a saucer of ice-cold water, if it gels up, it should be ready. 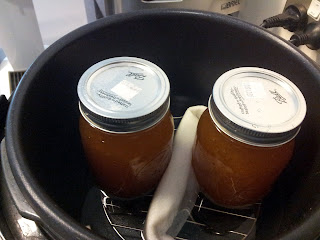 Pour the marmalade into sterilized preserving jars, screw on the lid, but not too tightly. Place a trivet on the bottom of the pressure cooker (now clean), or other pot big enough for the jars, pour enough water to come a few centimetres up the side of the jars, bring to the boil, place on the lid (if using a pressure cooker, make sure the valve is open so pressure DOESN'T build up), simmer for five minutes. Carefully remove the jars and leave them to cool on bench. The lids should ping, and become concave, if this doesn’t happen by the time the jar is cool, reboil the offending jar(s) for five more minutes. 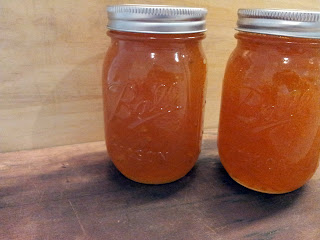