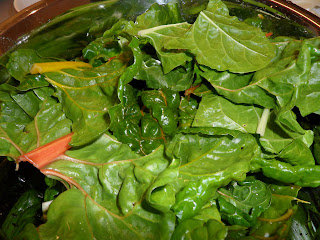 We have a good bunch of Silverbeet growing in our pots at home (Ruby & Yellow Chard), along with a several varieties of spinach.

With a big bunch of leaves I trimmed the steams of and roughly chopped the leaves into large pieces, and sliced up the stems. In a frying pan sautéed some chopped bacon until it had rendered all it's fat out and started to go crispy. Then I added some sliced onions and let them soften and slowly caramelise in the oh so good bacon fat. Next the stems get thrown in and left to soften slightly and finally the leaves which take no time at all to wilt down.

Dish up in a bowl and devour. The salt from the bacon combats the bitter from the Chard, very tasty snack. 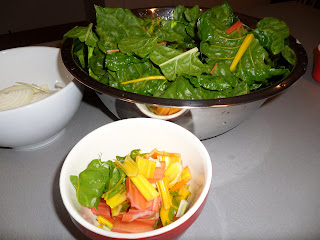